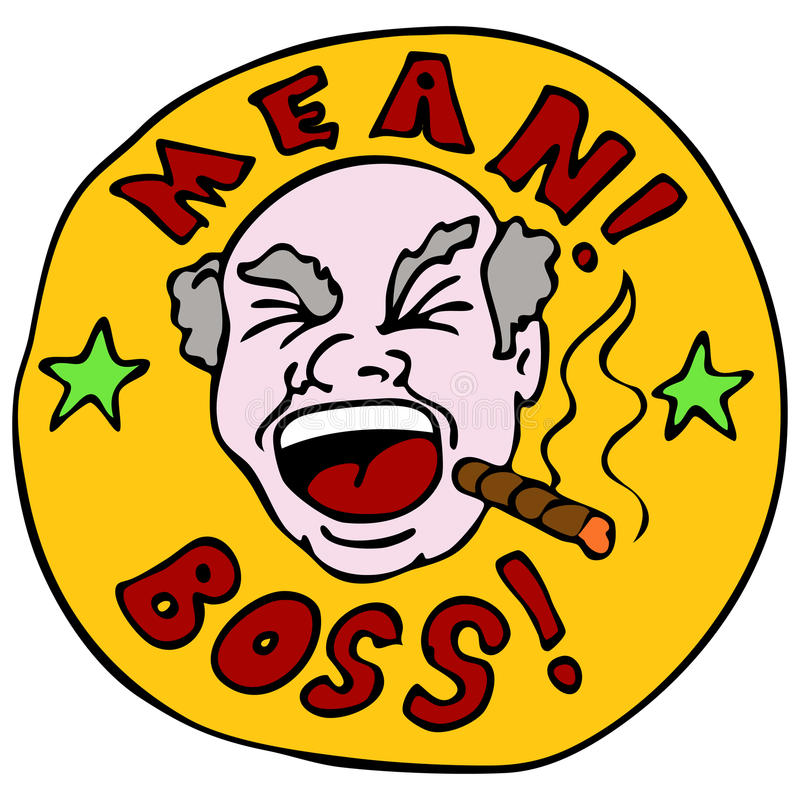 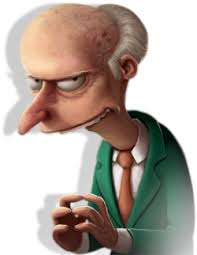 Is your manager predictable, mean and eager for power? Thousands of employees are groaning under a terrible boss. Some readers said it this way: “Indeed, my boss is a disaster: crap, without vision, no support, nothing. I always feel that I am losing weight, that I have to make a terrible effort and do not do it well enough. I have been struggling for more than a year and it costs me so much emotional energy.”

No pleasure in work

Anyone who has ever had a tyrannical, bossed-out manager will recognize these disparate stories. A manager who shows utterly unpredictable behavior regularly bursts out in anger, conducts a divide-and-rule policy, by again praising someone and then sabotaging another one, constantly shows who is the most powerful, such a person can spoil every pleasure at work.

So, why stay there at all? Change your life by working from home and making money on the side. Check out my recommendation no. 1 at the end of this article.

The victims have to deal constantly with questions going through their heads. Is it really that bad or am I imagining it? Am I the only one who suffers from it? Can I change it? And if the frustrations get really high: do I have to get on or put a stop to it? If so, where? But above all, the question is: how is it possible that assertive and emancipated workers let it go as far as they do?

Another commenter told: “In the morning I first see how his mood is before I decide whether I should inform him 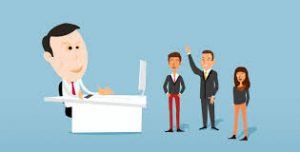 about something,and how to do it best. Things that are sensitive are saved for “the right moment”. I also go my own way as much as possible and inform him afterward. Then he will be merciless to me, but anyway then it is done in a way.

Usually, he sort of acknowledges me again after a few days.”
This seems to be some way of survival strategy. More difficult are the unpredictable calamity bosses who terrorize an entire team.

Some experts talk of a personality structure that makes erratic bosses mentally mistreat their employees under certain circumstances. That sounds like that boss is a serious psychopath who actually belongs in an institution, but that is not the case. The flaw is usually limited to contact with people who depend on him. As long as the disaster boss does not have to deal with people, but with materials – computers or money – he often functions well. Sometimes a few employees also manage. The chance of escalation increases when the employees can not easily leave things alone.

The disastrous boss is often a very nice guy, just as the greatest psychopaths can be very friendly. Real disaster 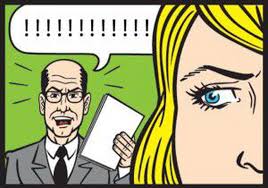 bosses sometimes give a lot of attention, listen well and share presents, but the next moment they are fierce, angry and rude and plays everyone against each other. They create an atmosphere of fear and intimidation.

This oppression can last for a long time. A very destructive boss forbids his employees to talk to others about problems in the department. Employees have a solid mechanism that helps them to survive a crisis. In such a case, they suppress their frustrations and are more tolerant than usual. But these mechanisms are often used too long.

The effect of the intimating behavior of the chef on the team members can also be very different. The stronger ones close their eyes, take distance and avoid the boss. The rest tries to survive with the courage of desperation and thus run the greatest risk of becoming ill and ending up in social care.

‘In my short career of three years, I have indeed seen a number of disaster bosses’, writes a discouraged reader. It seems like a typical case of bad luck. But anyone who has had a disaster boss more than once should take a good look in the mirror. Some people almost have a sadomasochistic affliction at work. They have an inner script that says they can not be happy in their job. They are therefore masters in triggering conflict situations.

Sometimes bosses are labeled as ‘a disaster’, while in practice that is not a great deal. The question is: what is reality 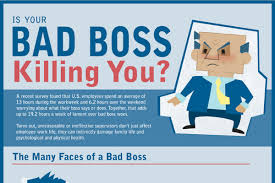 and what is fantasy. To what extent has the boss been labeled a disaster figure by a team? Employees can sometimes very much idealize their supervisor. If the manager then does not meet the expectations, he is collectively rejected.

In general, the expectations regarding the behavior of managers have much increased in recent years. It is demanding which qualities a manager must have these days: result-oriented, transparent, coach, guarding quality, strategist, and so on for a while. That is an impossible amount of qualities that a person must have.  This is still no excuse to take anything out on the employees.

So what to do when your manager is antisocial, plays games, gossips, and goes street fighting if he is not right? Anyone who has great difficulty with the annoying behavior 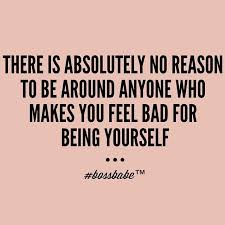 of his supervisor must make a plan. The main question is then: stay or leave? Can you as an employee improve the situation or is there really nothing to do about it?

You should set yourself very clear terms within which things have to change, otherwise, a situation arises in which you tolerate everything but continue to complain. You have to make an active choice and make sure that trouble does not happen to you. Keep it in your own hands.

Do not let yourself get sick by an organization, that’s your responsibility. You will have to draw the line yourself.
Yet many people ignore that logical advice and they stay much longer than healthy. The emphasis here is on your health. You should take action whenever your health is at stake, with no concessions!

Only someone who is very strong-willed can try to address the situation. But it is a decision that requires careful consideration. Because the messenger of bad news is at great risk. Colleagues who initially support you can drop you just like that.

What about going to HR? In nine out of ten cases you will get a snapback: What are you actually meddling with? 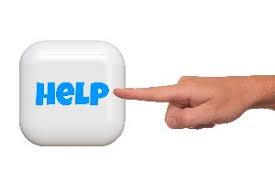 Many personnel departments choose management for fear of their own position. And even if they raise the case with the management, they often receive no feedback. You see a lot of protective behavior in organizations. Then the management says: can be, but it is a damn good guy so we have to accept it.

It may seem smarter to discuss the case with the company doctor or your union. Even if you are not (yet) ill, you can have a meeting.  It is known that a few times the boss was transferred. It is amazing though how long it takes before a company really intervenes. Much human damage has already been done.

It is only when business economic damage can be demonstrated that management comes into action.  Mind you, it is certain that these kinds of bosses can be very harmful to their working environment. Employees literally break down and far too many chefs chase their employees into unemployment. This is also the fault of the organizations that do nothing about it. A lot of new employees report sick every month because they have a quarrel at work. Usually with their boss. 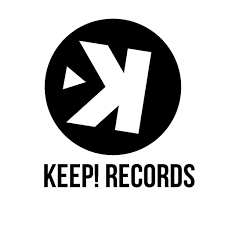 For those who do not want to be bothered by a bully, or who have to stay for financial reasons I have a few tips. If a supervisor nudges you by not keeping to agreements, it is important to build up a file by having the agreements recorded in writing. If the agreements are not fulfilled, you can go to a higher boss with the question: how do we solve this?

In many conflicts, it is important to make a good analysis yourself. If there are always deadlines that can not be met, you could compare them with those of colleagues. If necessary, make a fact-based estimate of the duration of a job and then go back to the boss. Some people opt for pleasure in their work. Many victims of disaster bosses will eventually do this too.

No boss is worth falling sick over, because of his bad behavior. When you decided to leave, but before you got another job, just focus on the positive aspects: the nice colleagues, the good salary, the short travel time and find your ambition – for a while – outside work. In the meantime, look for a better working environment.

Start your own business from home

If you would be afraid of a repeat of this situation, why do you not start your own (internet) business? Everyone can do this with the right support. I have had my internet business since 2015. I did not know how to start a website, how to get traffic, how to attract an audience and how to monetize the site. Fast forward, I am now the proud owner of two websites.

You can do the same! The best internet business support program in the world is Wealthy Affiliate, of which I have been part since the end of 2014. Established in 2005 WA has a growing number of members, in 2017 totaling more than 800,000. Join this community FREE for one week through a link in my WA review and see how it works. I will be there to welcome and guide you. I am giving a lot of details and opinions from my experience with them since 2014 in my personal review here.

In case you have questions, please leave them in the comment box and will come back to you within 24 hours.

2 thoughts on “Help! My boss is Mean”